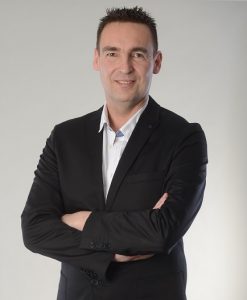 Rafael Badziag is an international entrepreneur, top TED speaker, best-selling author and angel investor. He is a valued expert in the psychology of entrepreneurship, specializing in self-made billionaires and was featured on NBC, ABC, CBS, BBC and FOX networks as well as in Forbes, CNBC, USA Today, Wall Street Journal, Entrepreneur, Inc. and other leading national newspapers and TV networks in over 40 countries around the world.

Rafael has founded and is shareholder of companies in several countries of Europe, Middle East and America. In the late nineties he built his first multi-million dollar business Raddiscount.de pioneering e-commerce in Europe. It was the first online bike shop in Germany, which he developed into an established business in the German-speaking market. He is the founder of the 10 Digit Impact Group. 10DIG is a group of 10-digit entrepreneurs (billionaires) with a global reach and a vision to have a positive impact on the lives of billions of people. His company, Billion Dollar Enterprises, is on a mission to build a global support ecosystem for entrepreneurs that uses the knowledge of billionaires to help its participants create value of billions of dollars before the end of 2024.

Rafael has given some of the most popular TED talks in history that have been watched over 4 million times, including the famous “Impossible Is Easier Than You Think”. He has published several best-sellers including the #1 Amazon best-seller “The Billion Dollar Secret”.

His passion is learning his limits and crossing them as well as learning the limitations of the people around him and helping them to overcome those.

Rafael is founder of the NoLimits project, where he fights against the limitations of his body, mind and soul. You may find him sprinting on a treacherous mountain trail, running a 111 km ultra race across the Sahara Desert, or dancing a tango on the floor of a fancy Milonga. On his English blog, NoLimits.co, he describes his extreme experiences and inspires others to follow his example, to also undertake challenges and to reach seemingly unachievable goals. The motto of this project is given by T.S. Eliot’s words: “Only those who will risk going too far can possibly find out how far one can go.” The mission here is to inspire the readers to live their lives fully with passion and zeal, to make them leave their limits behind them, so they can rise above the boundaries of mediocrity and experience their full potential, exceptional success and deep satisfaction in their lives.

His expeditions and remarkable journeys have taken him around the world several times, from the ice desert of Antarctica through the hottest deserts on the planet to the Peaks of the Seven Summits. He has visited all seven continents.

The book “Ready, Set, Go!” that he has co-authored with Brian Tracy, the world’s greatest business teacher and personal performance trainer, and some other top experts became an Amazon bestseller in multiple categories and has earned Rafael the Quilly Award.

Recently, Rafael has been traveling the world and meeting the world’s most successful entrepreneurs, all of them self-made billionaires, from various regions, industries, cultures, religions and age groups. He managed to open the most inaccessible doors and got access to some of the wealthiest people on the planet. By conducting face-to-face interviews with them he was able to obtain first hand information on their methods and mindsets. He reveals their success secrets in his book “The Billion Dollar Secret” and the corresponding YouTube channel.

The book reached #1 Amazon Best Seller status in several countries including USA, UK, Canada, Brasil, United Arab Emirates and Germany and became a global best-seller. The book is a finalist of the National Indie Excellence Awards and got nominated to the Business Book Awards. There are 15 language editions underway. On top of the three English and two Portuguese editions, the book will be also published in Chinese, Spanish, Polish, Turkish, Bulgarian, Vietnamese, Korean, Ukrainian, Serbian, Hungarian, Estonian, Lithuanian and Indonesian.

Rafael is often called The Napoleon Hill of the 21st Century or The Billionaire Magnet. He is a valued contributor to major business magazines including Business Insider, CNBC and Entrepreneur.com and is often featured as an expert on top media outlets around the world (over 300 articles, tv and radio interviews in over 40 countries).

Rafael is a member of the National Association of Experts, Writers & Speakers and the Entrepreneur Leadership Network. He was recently inducted into the National Academy of Best-Selling Authors.